Stepping into the Dream Stream


Recently, after receiving guidance to do a specific task, I had to call transformational guide Leyla Atwill, author of Ten Secrets of Living Your Dream, for a phone rescue. See, I've been applying for job interviews in Ventura, but I clearly got the download to go ahead and apply for work in Arroyo Grande. I did try to make myself feel better by stating that “well, Arroyo Grande is on the way to Ventura,” but waaaaahhhhhh!!! I want to be in Ventura already and feel that anything less is failure.

Leyla told me to think about it like this:

According to her book, the top secret is for me to feel love for where I am, right now. This is the most important work that I can do. Developing a self-love practice is at the core of reaching my dream. The reason is vibrational alignment. If I feel as if not being in Ventura right this second is coming up short, then I'm coming from lack, which is a feeling place of not being enough.

However, if I see myself standing on the shore of a big river, with Ventura on one side and me on the other, my intuition to take action towards Arroyo Grande represents a stepping stone in the river. I can't jump the whole river at this point, but I can step across the water, stone by stone. 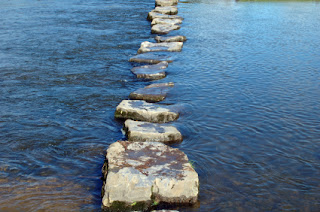 Now the question becomes, can I love myself while standing on an Arroyo Grande stepping stone on the way to Ventura? If not, why not?

These questions are presented as a guide to recognizing habits that keep me from wading into the river in the first place; habits that I have developed as a coping strategy to avoid uncomfortable feelings.

Once when a friend and I were hiking in the Angeles Crest mountains near Pasadena, we crossed a small but swiftly moving stream. We had to step quickly across four or five stones to continue the hike. As we approached, we saw a couple on our side of the stream. The man was standing next to a woman crouched on the bank staring into the water. She seemed hypnotized. He seemed impatient.

Her analysis paralysis kept her from taking the first step. I know this feeling well. In my quest to unwind the feelings behind procrastination and doubt, it is easy to get caught crouching at the edge of the water. Paralysis is different every week, sometimes every day. Television, DVDs—especially the educational ones, ice cream and even voracious attendance of 12-step meetings, can keep me from following my guidance.

That crouching woman could have easily been me. But I trusted my buddy's sure-footed step. I watched where he placed his feet and quickly followed. This is the same as trusting my guidance. Quite frankly, when I look back across all of the streams that I have crossed, my inner guide has never left me stranded.

Despite my hesitation or my enthusiastic jumping into the stream for an icy swim, as long as I was listening, I have always safely reached the opposite shore.

Right now Ventura is my dream. It symbolizes expansiveness, opportunity, and connection. These qualities do not live in Ventura, they live in me.


Leyla Atwill is a transformational coach in Los Osos. She creates a safety net for her clients to recognize, embody and release the habits and choices that keep them from reaching their goals and dreams. She can be reached at (805) 439-0268.
Posted by Dorothy Ann Segovia at 6:25 PM No comments: