I just joined a prosperity circle at Inner Light Ministries based on Maria Nemeth’s book, The Energy of Money. Any unexpected income over the 9 week class and we tithe 10 percent to Inner Light. Today I got a 50.00 tax stimulus when I went to my mailbox. So exciting! I’m happily tithing my $5 for a cool $45 in my pocket.

At Monday’s meeting, I donated a total $6.00. The day after last week’s class I received a $10 gift card. My first thought about opening the mail that day was “Dang! I wish I picked up my mail before the class stared! I could have saved a bundle.’

Hey, a buck is a buck. I didn’t used to feel this way about money. In fact, I’ve spent most of my days in a serious lack attack. That means instead of being focused on what I have and appreciating it – I’ve been bummed that I didn’t have more.

a digital camera, a scanner, a bed from Monterey Mattress Company, a covered laundry basket, music stand for my electric guitar, studio recording time, money for a marketing consultant, a tailor for a skirt and pants that I need to try on first – in case they don’t fit – which means I’ll save another bundle, my own house, furniture for the house, a gardener for the house, a new car for the carport…..

Turns out this is exactly what Esther and Jerry Hicks talk about in the Money and Law of Attraction book/CD combo. Getting into the feeling space of mentally spending the money actually opens up the prosperity flow. The reason is because while we are mentally shopping in our heads we create a positive vibration that attracts more money (and love, health, joy) like a magnet.

Problems with money occur when I forget that the point is to be focused on what makes me feel good rather than spending the money. Actually, I had more fun mentally deciding which bank account to stash the $45 than spending it. Even though I was walking past Trader Joes!!!!

I am learning how to save. And the collage that is speaks to me now was created in 2005. The bottom sentence in particular stands out.

“With compulsive borrowing, treat the self-esteem deficit and the debt will take care of itself.” 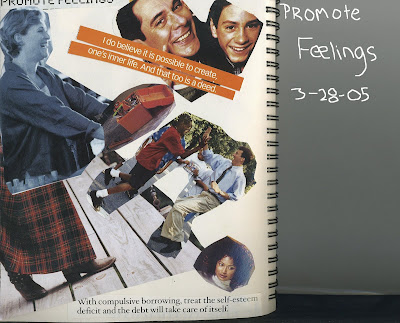 One of the homework questions in The Energy of Money was “What is the first time you lost money?” I don’t remember that but I do remember my first debt. It was at a swap meet and my older brothers and sister were there selling stuff. I had some albums to sell and unfortunately went window shopping. I came back to borrow a couple bucks from my brother Joe who gleefully announced that it was still morning and that I was already in the hole.

What did I buy? A purse! A little green plastic purse and I’ve been debting (and buying purses) ever since. Take a moment to find the Dooney and Bourke handbag in the collage below. 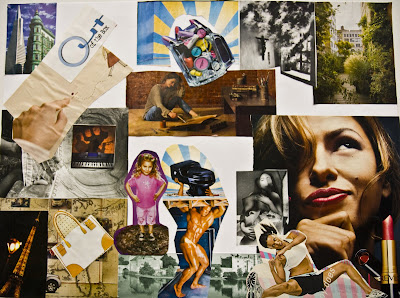 So, while I am so looking forward to paying cash for my Vision of A Purse that I’ll find at some groovy recycled shop OR EVEN paying full price at some swank shop in New York – I’ll have FUN thinking about what I’m going to put IN THE BAG (and what I’ll be wearing, and who I’m in New York with and where we are going for dinner and my fabulous career that affords such a lifestyle and the fabulous man who….) which makes the actual bag literally just a fun feeling target.

I’m not saying that spending money is not okay but I have learned that I have often spent money as a way to feel good: when feeling good takes mental energy, not money energy.

So, the moral of this story is when you feel scared about money, then find a way to mentally feel good about money or think about something else.

May all of your mental trips leave you feeling healthy and happy.

PS: Speaking of shopping – there are limited “Mulukuku CD Project” compilation benefit CDs left. This is a benefit CD I produced with proceeds going to the Maria Luisa Women’s Center and Medical Clinic.
Click here www.writeinside.com/pages/mulukukcd to listen to song clips of the 17 FAB musicians who contributed.

One of my favorite activities is drinking wine while watching exercise DVDs. It’s a very powerful and energizing way to do nothing. Actually, I’m just listening to the DVD because I can’t figure out how to have a small DVD window at the same time that I type.

Today is St. Patrick’s Day and celebrations are in order especially since its Dad’s birthday. The only problem is that Dad died in 1994. So, how do I let my body take the ‘I miss Dad’ hit and still feel good?

This is where the wine comes in.

Sundays when I lived in Pasadena, I’d drive down the 10 freeway to Dad’s place. After I played my latest songs on my guitar, Dad and I would pop a tall Bud, read the paper, watch tennis on TV and grunt answers to each others questions. Once a couple of bath-robed old ladies nearly came to blows over a Cadillac parked sideways across three of four parking spaces. Dad had to settle things down. He ignored the argument as long as he possibly could, but kept looking over his bifocals, then through the Venetian blinds all while glancing wistfully at the television.

“Awww, nuts,” he mumbled as he crushed out his smoke and donned his navy blue beaked cap. Gleefully, I kneeled on the chair and peeked as he walked into the melee. Being the assistant manager of the senior complex, he took charge and pulled out the small notebook that he kept in his shirt pocket. He took notes as each of the ladies took her turn. I tried to figure out which one was the Cadillac driver, but apparently it was neither. Both were just arguing about the best way to punish the driver.

(I actually have no idea if the last two sentences are true – but wouldn’t it be hilarious if it was?)

I miss those Dad days. And I’d like to someday learn how to not be sad on Dad’s birthday, but it’s not today. This blog, I’m leaving you with one of my favorite Dad stories that I wrote for a creative writing class. I can hear Tracy York, the SHAPE your abs instructor calling out “pony to the left.” This I’ve got to see.

I am where we are supposed to meet, but no Dad. I try not to take it personally, but it is hot. In an effort not to cry, I get pissed instead. We are supposed to meet at the Main Gate of Santa Anita Race Track. In two hours, I’ve learned how to use the betting machine, met a cool guy, and drank one warm beer. At home I call to find out what happened. “I was there at the Main Gate,” he said. “Which Main Gate?” I holler over the phone. He doesn’t like to wear his hearing aid. “The Main Gate at the front entrance.” “Okay, let’s try it again next Saturday. How’s jury duty?” “Jewelry? What jewelry?” “Never mind, see you next week at the Main Gate.” “Don’t forget to bring your camera” he yells and hangs up.

Now it’s the next Saturday. No Dad. I am where we are supposed to meet, but no Dad. I race to the infield gates then back to the Main Gates. I’m early but I still can’t find him. Finally, in desperation, I ask an attendant where the Main Gate is. He looks at me like I’m crazy but this time I am determined to find my father. I think about how smart Dad is. I think about how much he loves kindness and music and art but that it is our secret because I am the only one who visits. When I was younger, I’d blame Mom for this because she used to call him a liar. Okay, one for sure lie that I know about was the time he said that he was going to night school and instead went to the bar for an entire semester. But still, that has nothing to do with this Main Gate.

I ask the attendant “is there a gate for people who take the city bus?” He points to a mere break in the fence, so narrow that a child, much less a grown man, could never squeeze through, even if he wanted to. There is a small chain link across the opening and I notice the rickety wire gate. As I rush forward, I become 12 years old and jam my nose through one of the wire links. There, sitting on top of a picnic table smoking, is my father. In spite of the heat, he is wearing his gray polyester blend slacks from the Blair catalog, his straw hat. His coat is folded neatly over his arm. He looks up and butts out his Lucky Strike. Smiling, he walks through the gate to me.

(PS: Dad was bummed that he didn’t get chosen for jury duty. It was a murder trial and Dad said that he told them, “They should hang ‘em, if he’s the one who did it, that’s what they should do.”)