Armageddon begins with free parking for eternity. When I returned to Santa Barbara on the 11th day of the Thomas fire I stopped at my PO Box. I drove into the Victoria Street Station lot expecting to pull a ticket. But happily and hopefully with pay, the attendants have been set free to breathe. The parking arms were up and several cars were circling the lot hoping that someone who didn’t have to leave, would. I double-parked and scurried the few yards into the post office and back.

Once home, I snapped a photo of the Adirondack chair covered in ash, ate a bowl of cereal and contemplated staying while reading through the mail. Staying meant emptying my packed car of precious items because I park on the street.


I pulled a prayer card from my Doreen Virtue Mother Mary card deck. The answer was to pray and wait for an answer. I thought about how nice it felt to be home, to be in my sweet little furnished room rental. Though visiting friends is great, I miss my space when I’m gone. In spite of the fire being 10 miles away and the mandatory evacuation zone only several blocks away, I felt safe. Then helicopter number one flew overhead. Upon hearing the second chopper I got up for a look-see. It was orange and flying out towards the neighboring hillside: firefighting.

Between being stuck inside due to ash and smoke, as well as the sounds of the firefight, it was too stressful to focus on my work. So I packed a few more things, called my brother in Anaheim and left. I cried on the drive through the surreal scene of smoke covered hills, more plumes of smoke indicating the back burn fires set by the crews, and in Ventura, the fire engines parked along the Seward overpass with firemen standing on top. They were honoring fireman Cory Iverson as his body was transported to the medical examiner’s. In a fast food parking lot off the 126, I watched a small fire come over the top of the hill across the highway and quickly spread. Maybe it was preventative. Maybe not.

As I stood in line to order, a young man asked if I was a teacher. He explained that he was a film student, but was contemplating teaching as a backup plan. Yes I have taught. But as a writer I told him of my regret not jumping in wholeheartedly, no backup plan strategy. He was looking for approval more than advice. Being in a hurry, I quickly agreed to his idea.

I did not catch his name, or know anything else about him. But if you happen to meet him, please tell him this: if you keep your heart open to your life’s calling, the grace of life itself is your backup plan. To paraphrase Annie Dillard, “if you really want something, make yourself an arrow and aim yourself there.”
Posted by Dorothy Ann Segovia at 9:20 AM No comments:

It's the third month of the year...do you know where your vision is?
Lots of us start out with big plans, yet we run out of steam before January 31.

I've learned to set my sights on enjoying NOW while I set intentions for tiny events to look forward to.

For instance, I walk into work at 8am and I'm looking foward to my cup of tea and my 10am walk.
At 10:15 after my walk, I intend to have a fun, nuturing, inspiring or restful lunch...and even decide whether I'd like to spontaneously run into a friend or not.

By Tuesday, I start making fun plans for the weekend, something wonderful to look foward to.

While I do have my larger plans for myself, this year, I made a fun collage and took a photo to keep on my phone.

It's a fun way to stay inspired, and enjoy my Now.

What keeps you in the Now??? 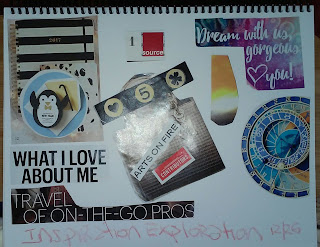 Posted by Dorothy Ann Segovia at 5:36 PM No comments: